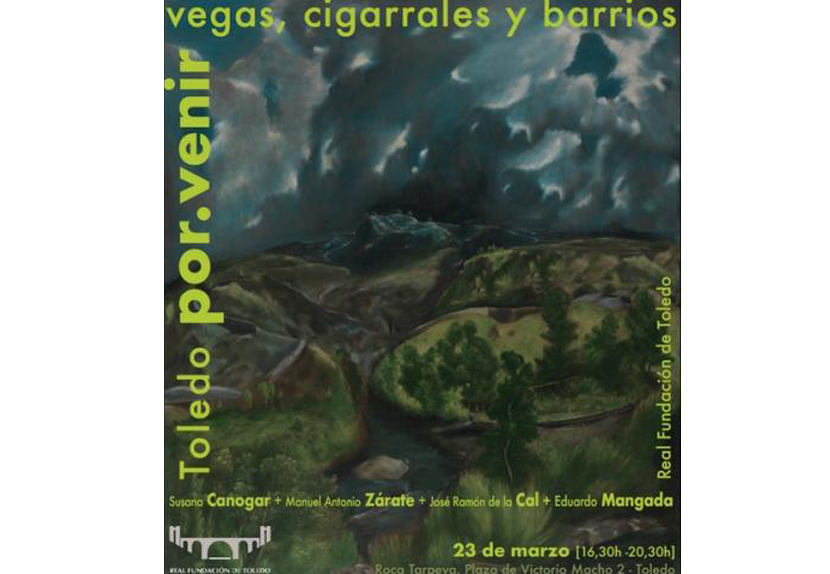 On March 23, the second of the lecture series on planning issues organized by the Real Fundación Toledo, took place at the Foundation headquarters at Roca Tarpeya, Toledo. The event included an opening statement by Juan Ignacio de la Mesa, President of the Foundation and former mayor of Toledo, followed by an introductory lecture given by Susana Canogar, followed by presentations by J. Antonio Zárate, geographer and a dissetation by the coordinator of the event, architect J. Ramón de la Cal, with closinf statements by the pretigious urban planner Eduardo Mangada.

The event proved to generate much local interest motivated by the ongoing revision of the Toledo General Plan, with the attendance of diverse members of the municipality, including council members for Urban Planning, Culture, Public Services and Sustainability, as well as the Planning Director General of the Region of Castilla-La Mancha, the Director of the Architecture School of the Castilla-La Mancha University and diverse representatives of neighborhood associations, among others. The auditorium was packed.

The event continues generating debate on the need for a new focus for Toledo city planning, a series that began with the previous event Topographies in time, September 20th, 2016. The objective of Toledo to come was to defend the municipality of Toledo as a constellation of territories, in which it is possible to densify present neighborhoods without resorting to occupying green fields and putting historic Toledo landscapes at risk, as is proposed by the municipality.

In her lecture, Landscape, a strategic asset for Toledo, Susana Canogar spoke of the great opportunity to incorporate landscape as an organizing principle in new city planning codes, so complying with the European Landscape Convention, that came into effect in Spain in 2008. She spoke of the importance of landscape as a vehicle for cultural identity, starting with her experiences on the value given to landscape in the U.S. and how the urban park movement that was created well over a century ago, has made landscape an essential part of American cities. The lack of sensitivity in Spain on the contribution of landscape to the GNP and the destruction of large areas of the Mediterranean coast, with unsightly scars that disfigure the magnificent landscape of the Levant, the same landscape that drew tourism in the first place, should be a warning to the city of Toledo. She spoke of the protection of monuments and natural landscapes by international agreements such as those of UNESCO, with a reminder that Toledo is a World Cultural Heritage City since 1986. The more recent European Landscape Convention deals with all issues related to landscape, not only notable landscapes, and the necessary incorporation of the philosophy of the treaty into local and regional planning legislation, with the very recent announcement on the preparation of a new Landscape Law for Castilla-La Mancha.

The urban historic center in Toledo, its river and vegas, the cigarrales (a unique historic housing typology in the hills surrounding the city center), and the outlying neighborhoods, all form part of a landscape mosaic. The constructed landscape in symbiosis with the natural: a unique city model inherited from the past that Toledo can offer to the world.

Susana spoke of the Vega Baja in Toledo, a location outside the city walls where the construction of a shopping mall was fortunately paralyzed in 2006, and the great opportunity for the city to ensure the protection of this large open space to create a new urban park for the city where archeological remains can be enjoyed, such as the Roman circus, and begin to compensate the lack of green open space in the dense historic city center. A privileged open space next to the historic center, a natural connection to the Tagus river and a place to enhance learning, with the presence of the Architecture School of the Castilla-La Mancha University in the old Armory of the City. A full of aces for a park that can put the city of Toledo at the forefront of historic cities in the European continent, where it belongs.